With three days to go before Halloween, I am yet again reminded that things are not normal in 2020. The pandemic continues to exert its influence, with new cases and deaths on the rise. We will not have trick-or-treaters this year. Oh, how I’ll miss those precious young faces and adorable costumes!

I’ll confess that I’ve been so immersed in the American expression of Halloween that I’ve forgotten its ancient roots. It’s said that it dates back to the Celtic festival of Samhain which marked the end of the harvest and beginning of Winter. Folks believed this was a time when the barrier between this world and the next was so thin that spirits could enter our world and walk among us. Therefore, one needed to set places at the table or leave food and drink by the door to show them hospitality. A lit jack-o-lantern would ward off evil spirits. The smoke and flames of bonfires were also deemed protective and cleansing.

As Christianity spread throughout the region, Samhain gave way to All Hallow’s Eve, the start of a three-day period during which one honored the saints and martyrs and prayed for the recently departed souls who had yet to enter Heaven. All Hallow’s Eve was also thought to be the last day on which the dead might walk among us to gain recompense for wrongs committed against them during this life. These souls would don masks and other disguises to avoid being recognized while they attended to their business.

From at least the 16th Century onward, ordinary citizens took to mumming or guising by going house-to-house in costume in search of treats in exchange for a song or verse. Some offered to pray for the souls of the departed. Others personified the spirits of yore who needed to be appeased in order to grant health and well-being for the coming winter.

Not surprisingly, traditional Halloween lawn decorations and costumes emphasize the supernatural: headstones, coffins, skeletons, skulls, ghosts, goblins, witches, vampires, monsters, and devils. They conjure up images of the dead, evil spirits, and those equipped with the power to cast spells. They’re deeply rooted in our cultural consciousness whether we attribute power to them or not. (J.K. Rowling used these themes to good effect in the Harry Potter books!) 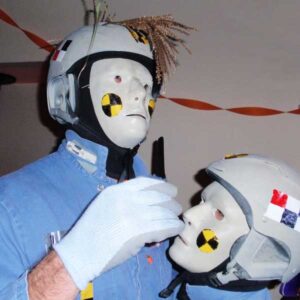 I loved going trick-or-treating as a kid. Back in those days, we never worried about some crazy person putting harmful contaminants in our candy. We’d go in packs from door-to-door and grab as much candy as we could muster and then gorge ourselves on the spoils. It was a night to which we all looked forward every year.

I’ve been to my share of grown-up Halloween parties and marvel at the creativity of my compatriots. Standouts over the years include a man riding as ostrich (where his skinny legs in tights were the ostrich legs) and a pair of crash dummies.

This year, we might go back to the Christian tradition of remembering the dead. We will special homage to my mother, who passed last February, and to Associate Justice Ruth Bader Ginsberg, who passed in September. We will also pray for the nearly quarter-million persons who have lost their lives to the coronavirus and the loved ones they’ve left behind.