During the past few weeks, millions of workers lost their jobs and applied for benefits. Economists from the University of Michigan expect unemployment rates to top 15% amid a sharply declining domestic gross national product. It’s hard to draw inspiration at times like these, but I’ve found some by reflecting on my mother’s life and how she soldiered on during trying times.

Mom spent her formative years in a country wracked by the Great Depression. Her parents earned a subsistence living as officers in The Salvation Army, and the family moved frequently to serve missions around the country. It was a difficult life, and the lack of constancy contributed to a lifelong tendency toward shyness. 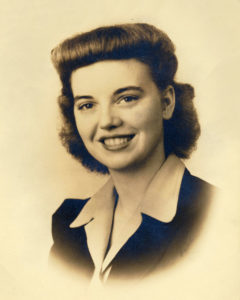 Economic necessity compelled Mom to join the work force as soon as she graduated from high school. She was sharp as a tack, a superb communicator, and a phenom with typing and shorthand. Even so, she faced substantive competition at every turn from folks who had far more work experience.

Late on a Friday afternoon, she submitted a job application along with a couple dozen other women. She was told that they’d get back to her the following week and schedule an interview should her candidacy merit consideration. She decided not to wait. Come Monday morning, Mom showed up at the company’s front door ready to go to work. She got the job and never gave them pause to regret it.

She met the love of her life at Sutro’s Ice Skating Rink in San Francisco. They married in a private ceremony at the family home and settled into a one-bedroom apartment. They lived on my father’s salary to provide flexibility for Mom to stay home once the children arrived. They didn’t buy a car until they were able to pay for it with cash.

Mom turned her attention to full-time parenting while my older brother and I were pre-schoolers. Shortly after I entered kindergarten, she returned to work to help us maintain a home in the area’s premier school district. She also began taking courses at the local junior college to fulfill a life-long dream of attaining her baccalaureate degree.

Mom spent the balance of her career as an eligibility worker with the County of San Mateo. In this capacity, she helped the less fortunate identify opportunities for governmental aide and provided fiscal oversight for selected programs within the county hospital system. Her coworkers and clientele had nothing but high praise for her dedication and efforts.

No matter how busy she was with school or work, Mom never missed a beat on the home front. She took excellent care of the house and its inhabitants, volunteered at school, church, and civic functions, helped with homework, and participated actively in our musical, athletic, and social activities. She was also Dad’s sounding board professionally and his partner in life, parenting, home renovation, and landscaping. One wonders how she got it all done!

Beyond her prodigious accomplishments, I stand in awe of the determination that got her through the tough times and kept her moving forward. She mustered the courage to do things that were decidedly uncomfortable for her. She took on unpleasant work assignments to be responsive to her family’s fiscal needs. She never backed away from a challenge and spent a lifetime learning new things and honing her skills. Moreover, she was committed to putting forth her best work no matter what was asked of her.

Having lived an exemplary life, Mom finished her earthly journey three months ago today. Her final years were difficult, but she did her best to put on a brave face and carry on. May she rest in peace.