Gloria Steinem was an iconic figure during my formative years. A pillar of second wave feminism, she made headlines as a speaker, writer, editor, advocate, and community organizer. She embodied the winning trifecta of bold, brilliant, and beautiful. It would never have occurred to me that she ever experienced self-doubt. Yet in Revolution from Within: A Book of Self-Esteem, she reminded me that even superachievers aren’t superhuman.

For each of us, the communities of which we are a part exert a profound influence on our sense of self. The dominant culture establishes social hierarchies and normative behavior based on race, ethnicity, class, gender, and sexual orientation. In particular, Western civilization teems with disempowering messages for women:

Given the power of these external influences, it’s easy to quash an inner spirit. We become some version of what society expects of us or face substantial headwinds when charting a different course. Gloria’s root thesis: “Systems of authority undermine our self-authority to secure obedience; thus, self-esteem becomes the root of revolution.”

Gloria makes a distinction between core self-esteem and situational self-esteem. Core self-esteem entails a conviction that we are loved and lovable, valued and valuable as we are, no matter what we do. Situational self-esteem ties to evidence of being good at something, praised for something, overcoming obstacles, achieving goals, and/or aligned with the “right people.” The former confers a sense of inner peace and equanimity with which to engage the outer world. The latter places the outer world in control and tells us that we are never enough. 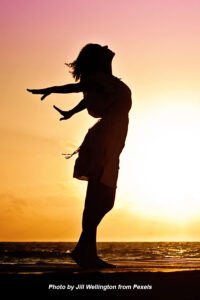 So how does the revolution begin? Gloria encourages us to go on a journey of self-discovery through which we:

When we come into our own, we gain new eyes with which to see ourselves and a new perspective when looking outward. We experience an inner energy that is ours alone yet connects us with everything else. Core self-esteem becomes a self-reinforcing fountainhead of positive action for one’s self, one’s friends and family, and the world.

As one who has lived for over six decades, I’m not the least bit surprised that this work emerged as Gloria entered her 60s. There’s something wonderful about having a lifetime of experiences when settling in to who and what one will become in the final chapters of life. One feels less of a need to prove anything to anyone else and more of a determination to be fully authentic and fully alive. For me, these parting thoughts say it all:

“Our brains are ever subject to improving, diversifying, and sharpening, if we will only believe in them enough to stimulate them… When our talents are required and rewarded, we can stretch our abilities, use the energy of self-esteem to activate the unique mix of universal human traits we each possess, and uncover a microcosm of the universe within ourselves.”