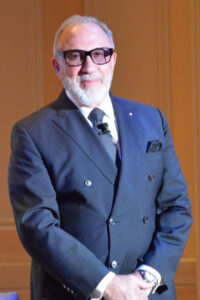 With all the rhetoric surrounding immigration in recent years, I found myself drawn to a story of one of the most successful immigrants of my generation – Emilio Estefan. Founder of the Miami Sound Machine, he and his wife Gloria orchestrated the group’s ascent to the top of popular music while establishing themselves as icons in the entertainment industry. He captures his impressive journey from rags-to-riches in The Rhythm of Success: How an Immigrant Produced His Own American Dream.

Here are aspects of his life that I found inspiring.

He left Cuba with his father at age 11 with nothing but the clothes on their backs. Emilio and his father hoped to reach America and establish a base from which they could send for the rest of their family. However, in the aftermath of the Bay of Pigs, Cubans could not travel to the United States directly. Emilio and his father had to spend 18 months in Spain before gaining admission to this country. They were unable to secure employment and lived on meager resources supplied by relatives who’d escaped Cuba.

He took responsibility to secure freedom for his family. That desire fueled a stellar work ethic and ferocious desire to succeed. He learned the language, excelled at school, and worked multiple jobs to support the family. Throughout his teens and twenties, Emilio’s “north star” was getting his extended family out of Cuba – a goal he reached 15 years after his arrival in Miami.

He built a career doing work that he truly loved. Music was Emlio’s passion from an early age. He found the Latin beat contagious and took solace in making music with others. He formed the Miami Latin Boys as a teenager and booked gigs in the area to feed his passion and generate supplemental income. With the addition of a female lead singer, Gloria Fajardo (Emilio’s future wife), the group changed its name to the Miami Sound Machine. Emilio eventually stopped performing and took over the group’s business affairs.

Emilio, Gloria, and the Miami Sound Machine changed the face of popular music with their distinctive fusion of Latin, pop, salsa, and disco. Emilio branched out into music publishing, producing, and recording. His Crescent Moon studios became the center of Miami’s “Motown.” Their success paved the way for the artistry of Jennifer Lopez, Ricky Martin, and Shakira, among others.

He is a visionary entrepreneur with a lengthy track record of successful ventures. Emilio formed Estefan Enterprises in May 1986 through which he managed a music publishing company, a recording studio, restaurants, hotels, and commercial property investments. He has collaborated with some of the giants in the recording industry (Quincy Jones, Tommy Motolla, Sean Coombs). He and his wife are part owners in the Miami Dolphins.

He commits himself to being a great boss. Emilio speaks to the importance of working shoulder-to-shoulder with his employees and treating them with respect. He takes responsibility for their livelihoods and provides opportunities for them to grow personally and professionally. He challenges them to do their best work and feel a sense of ownership to the business and clientele they support. He is loyal to his co-workers and values loyalty in return.

He adopted a conservative approach to fiscal management. From the moment he arrived in America, he never spent money he didn’t have or wasted it on things he didn’t need. He kept his “day job” during the Miami Sound Machine’s early years to ensure a steady source of income. He leaned heavily on his own resources to finance new business ventures rather than go into debt. He manages all of his business enterprises frugally, thereby promoting their longevity even when unforeseen disasters strike.

He’s an optimist. He makes a habit of finding the positive in any given situation. He works toward his goals tenaciously even when faced with sizable headwinds. He sees opportunity amidst adversity and has proven time and again that he can achieve what he sets out to accomplish.

He remains a committed family man. He and wife Gloria have been married for over 40 years and have raised two exceptional children. They live and work with their extended family. Despite a very public lifestyle, their names have never been associated with scandal. They’ve maintained humility and grace in the wake of astonishing success and a heap of international accolades.