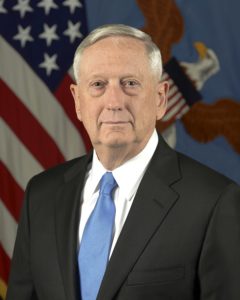 In my third post on leadership, I’ll share insights from Former Secretary of Defense and Retired General James Mattis’ book Call Sign Chaos: Learning to Lead. In addition to his civilian posts, General Mattis held command positions in three Middle Eastern wars. He led the Marine Corps Combat Development Command, a specialized unit that ensures the combat-readiness of the Corps. And, he was a Supreme Allied Commander for the US Joint Forces Command. In short, he knows how to lead.

My Dad was a proud Marine. From the Corps, he gained a profound sense of duty, his commitment to always being prepared for what was expected of him, and a dedication to mastering his profession. As a new recruit, he learned that “you can be a quitter, or you can be a Marine.” Dad was no quitter. He described his leaders as “tough son-of-a-guns” – as tough (or tougher) than the men in their charge. (Yep, it was all male in those days.) He admired them through and through, never hesitating to follow them into battle.

While quite a bit of the book addresses the military, a large number of his precepts find resonance in any organizational setting:

General Mattis learned from others; he was always a voracious reader of military history. As he says: “By traveling into the past, I enhance my grasp on the present.” So, he offers these words of wisdom from General George G. Marshall:

“The leader must learn to cut to the heart of a situation, recognize its decisive elements, and base his course of action on them. The ability to do this… is a process of years. He must realize that training in solving problems of all types… are indispensable requisites for the successful practice of the art of war… It is essential that all leaders… familiarize themselves with the art of clear, logical thinking.”