With this week marking the 100th anniversary of the passage of the Nineteenth Amendment, it seems fitting to pay tribute to a modern day feminist icon.

Gloria Steinem was born on March 25, 1934 to Leo and Ruth Steinem. Along with an older sister (Susanna), the family lived an itinerant life during Gloria’s early childhood. They spent summers at a lakeside Michigan resort operating a dance hall, and passed the remainder of the year buying, selling, and bartering antiques from coast-to-coast. Both girls were home-schooled and developed a love of reading. 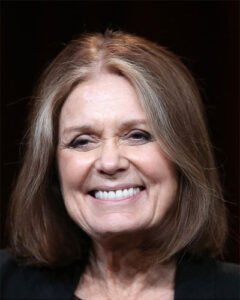 After her parents’ divorce in 1944, Gloria moved with her Mom to Amherst, MA to be close to her older sister during Susanna’s last year of college. Thereafter, they returned to Toledo where Gloria completed elementary school, junior high school, and her first 3 years of high school. She joined her sister in Washington DC to finish high school at a college prep institution.

In Fall 1952, Gloria enrolled at Smith College where she focused on her academic studies. She spend her junior year at the University of Geneva and studied at Oxford University that summer. Upon graduation, she secured a two-year fellowship to study in India. She immersed herself in the culture and was influenced powerfully by the teachings of Mahatma Gandhi. She marched in protest of the caste system and visited villages torn by violence. She also learned a powerful lesson in community organizing from an Indian teacher:

Upon her return to the United States, Gloria had difficulty finding a job. She worked briefly for the Independent Research Service in Washington DC before deciding to become a freelance writer in New York City. The available writing assignments for “girl reporters” in the early 1960s centered around celebrity profiles and style pieces. Though she felt little emotional connection to the subject matter, Gloria was content to do the work and pay her bills.

A novel opportunity arose in 1963 when she was asked to go undercover as a Playboy Bunny. The resulting piece revealed a work environment that was grueling, demeaning, and poorly compensated – jobs that no man would consent to do were the roles reversed. While the assignment should have drawn praise for the insightful exposé, it became a noose around Gloria’s neck. She was derided for “not being a serious journalist.”

Meanwhile, Gloria remained attentive to the issues of the day. In August 1963, she participated in Martin Luther King, Jr.’s March on Washington and was struck by the absence of African American women on the podium. As with the civil rights movement in India, the leadership muted the female voice. She wrote: “More than ever, I found myself wanting to report on this new view of the world as if everyone mattered.”

With the founding of New York Magazine in 1968, Gloria gained the opportunity to cover important stories as a featured columnist. Her investigative reporting on women’s issues elevated her awareness of the depth and breadth of gender inequality. A feature story on the nascent feminist group Redstockings garnered the Penney-Missouri Journalism Award.

Though never aspiring to be a public speaker, Gloria shared the stage with African American feminist Dorothy Pitman Hughes at the Women’s National Democratic Club in 1969. The two hit it off and made regular appearances together as community organizers. For Gloria, sexism and racism were intertwined, and the feminist tent needed to be big enough for women of all creeds and colors to find a home.

Now firmly entrenched in the movement, Gloria founded MS Magazine in 1972 as a place for women to read about women’s issues. As with most publications, she bolstered subscription funding with advertising revenue. Nonetheless, she would not countenance print ads that would exclude women who were not thin, young, pretty, able-bodied, well-to-do, or heterosexual. She courted gender-neutral advertisers – e.g., car companies, financial institutions, insurance carriers – and convinced them that women were prime decision makers in these product and service selections. Over time, she changed the advertising industry’s imagery, positioning, and understanding of the female half of the country.

Gloria was a delegate to the 1972 Democratic Convention and was invited to serve as its feminist spokesperson. In 1977, she served a pivotal role in the inaugural National Women’s Conference in Houston, a product of 56 “massively oversubscribed” regional conferences. This convocation developed planks on a broad range of women’s issues to which Gloria lent her listening, mediating, and writing skills to the “Minority Women’s Plank.” It was a life-changing experience, brimming with issues, possibilities, and a new sense of connection. In the words of Coretta Scott King: “There is a new force, a new understanding, a new sisterhood against all injustice that has been born here. We will not be divided and defeated again.”

Beyond her work with MS Magazine and the MS Foundation for Women, Gloria has traveled extensively as a guest lecturer, political activist, and feminist organizer. She particularly relishes opportunities to speak on college campuses where she never fails to learn something new. She also remains a prolific author having realized the power of the written word to shape the public discourse.