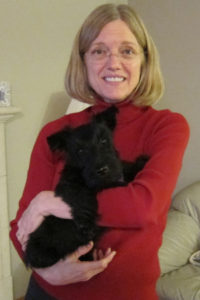 Happy birthday, Brodie! Our Scottish terrier turns 7 years old today. Hard to believe that a few short years ago he was an adorable little 8-pound pup. That cuteness still tugs at my heart strings.

My husband and I grew up with dogs as family members, but we didn’t add a furry member to our household until Fall 2011. At the time, my parents had a Scottish terrier named Angus whose care had exceeded their capabilities. So, Angus came to live with us. He was a really mellow dog who enjoyed hanging out with me in my home office and using my husband’s foot as a pillow when we gathered in the den to watch TV. We lost him 6 months later to lymphoma. I was heartbroken and really missed his companionship. We remedied the situation later that year with Brodie.

The Cascade Scottish Terrier Club posted a meme today on Facebook that declares: “All dogs are therapy dogs. The majority of them are just freelancing.” Those statements ring so true for me. We’ve had a difficult few years taking care of my elderly parents – watching their physical and cognitive capacities slip away as they’ve transitioned from independent living to various levels of assisted care. It has been challenging for all concerned. I’ve truly valued having a happy little guy who brings dozens of smiles to my face daily. He also models behaviors that I’d like to incorporate into my life.

He is intensely loyal to his tribe and relishes being with them. He greets us at the door with great enthusiasm whenever we’ve been separated. He wants to be where we are and keeps tabs on us as we move about the house. He loves to sit in my lap or lay down next to the sofa with his head on Spike’s foot. He monitors “intruders” (e.g., squirrels, cats, rodents) and lets us know that they’re on our property.

He’s a low maintenance fella yet knows how to get what he needs. His internal clock senses when it’s meal time; he turns on the charm to make sure that we know it, too! He has a clear and unobtrusive way of letting us know when he wants to respond to the call of nature. And when he needs cuddle time, he gives a look that melts the heart and opens the arms.

He welcomes guests as if they’re family. He LOVES people. Few things get him as excited as a new face at the door. He prances around to get their attention, graciously accepts scratches behind his ears, and runs around the lower level to disperse all that excess energy. He’s not great about detecting when visitors are lukewarm about canine companionship; he assumes that everyone will love him. 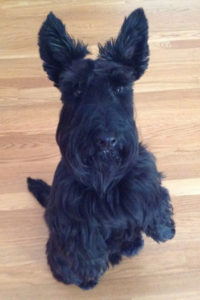 He loves to play. He stands at the ready to play “chase,” to run around the back yard, or to take on the dreaded “blanket worm” (a.k.a. a moving hand beneath a padded blanket.) He can get so excited that you’d think he’d wag his tail off!

He works for pay. He knows quite a few tricks, but he won’t readily perform them unless treats are involved!

He gets plenty of rest and enjoys “alone time” in his crate. He takes comfort in having the protection of his crate when taking naps or nodding off for the night. He hangs out there when we’re gone unless a comfy spot under the dining room table beckons. He gets a good night’s sleep every night… well, unless there’s thunder or fireworks.

There are times when it’s a hassle having a dog. We’re restricted when going out, being mindful of attending to his basic needs. And we’ve got to arrange caregiving if we leave town for the weekend. But those are minor inconveniences in proportion to the joy he brings to our lives.