“Nothing is miserable unless you think it so; and, on the other hand, nothing brings happiness unless you are content with it.” ― Boethius, The Consolation of Philosophy

Personal development coaches often tell us that we are in the driver’s seat when architecting lives full of purpose, fulfillment, and pleasure. If we control our perceptions of reality, we control the world in which we live. Armed with a rosy outlook and confidence in our ability to co-create the future, we can point our ships toward fruitful destinations and take full advantage of the opportunities that present themselves along the way. At best, we find this perspective empowering and use it to enrich our lives and those around us. At worst, we berate ourselves when we’re unable to find or capitalize on our personal mojo.

In The Happiness Hypothesis: Finding Modern Truth in Ancient Wisdom, Dr. Jonathan Haidt sheds light on this mind-over-matter psychology with the benefit of scientific research.

Our brain structure reflects millions of years of evolutionary development. While we have an oversized neocortex relative to other mammals, we retain ancient structures – i.e., the limbic system or “lizard brain” – geared toward ensuring our survival. It responds to stimuli in ways that that call for feeding, fornication, fight, flight, and freezing. It also sets off a gaggle of other bodily responses with the intent of protecting our lives and/or propagating our species. When the limbic system runs the show, it takes a good deal of effort for the neocortex to bring our behaviors into awareness and exercise control.

As I discussed in Our Guts Have Minds of Their Own, the human body also comes equipped with a “second brain” (dubbed the enteric nervous system) with 100 million nerve cells to manage our gut’s biochemical activities. Haidt suggests that this lower body intelligence may do more than simply digest food and manage immune function. It may respond to sensory input in a way that drives insights, decision-making, and behavior beyond our conscious control. One might say that there’s thought behind our gut feel.

As with the enteric nervous system, our brains attend to most of its daily functions without the benefit of conscious thought. The autonomic nervous system regulates bodily functions, such as the heart rate, respiratory rate, pupillary response, skeletal muscular activity, and sexual arousal. We’re also creatures of habit. When learning a new routine, our brain activity remains high from start to finish. Once a routine has been mastered, brain activity elevates only when encountering the initial cue and when reaping a reward for a completed task. We’re on autopilot between points A and B. (That’s why it’s so hard to break engrained habits!)

Finally, our brains are highly adept at rationalization. As Dr. Baba Shiv and others have demonstrated, we make decisions emotionally and then filter all subsequent facts through a lens that supports our previously rendered judgment. Feelings come first; reasons are invented on the fly. Again, it’s how we evolved to survive. Per Haidt, this internal “wiring” explains why it is so difficult to win an argument. Morality is like beauty; it lives within the eye of the beholder. Once entrenched, it’s hard to dislodge and even harder to persuade others of its merits. 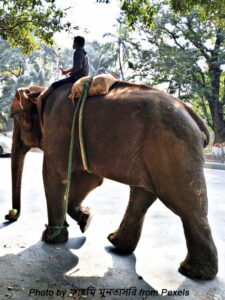 So, what does all this have to do with happiness? It tells us that our consciousness is not as powerful as we might have thought. Haidt likens it a rider atop an elephant, where the elephant represents all the parts of the brain over which we have little or no control. The rider has the ability to influence the elephant’s path, but only if the elephant is motivated to move in that direction.

If life is indeed shaped by how we perceive it, Haidt reminds us that such perceptions happen quickly and (largely) unconsciously. Furthermore, our survivalist nature causes us to give far greater weight to perceived threats, setbacks, and violations than it does to opportunities and possibilities. It takes effort and training to overcome this negative bias. We need to work with our “elephant brain” to move it in forwarding directions. Haidt advocates three methodologies:

In my next post, I’ll dive into Haidt’s formula for happiness and explore evolutionary responses to achieve it.