With last week’s focus on mental health, I thought I’d zero in on a particularly challenging form of mental disorder, Alzheimer’s disease. The Mayo Clinic characterizes the condition as “a progressive disorder that causes brain cells to waste away and die. Alzheimer’s disease is the most common cause of dementia — a continuous decline in thinking, behavioral, and social skills that disrupts a person’s ability to function independently.” 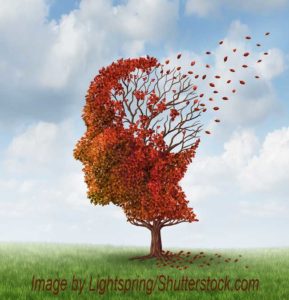 The Alzheimer’s Association has published a rather alarming set of statistics regarding the prevalence of this disease:

There is no treatment that cures Alzheimer’s disease or alters the disease process in the brain. However, as documented elsewhere in this blog, healthy lifestyle habits appear to be protective of brain circuitry and forestall its development.

I have some experience in this area. My father had geriatric dementia in his later years. While his cognitive functioning was impaired, he was still able to carry on an animated conversation until the last couple of months before his death at 96. My mother has fill-blown Alzheimer’s disease and has been substantively impaired for quite some time.

It turns out that while most seniors think it’s important to have their cognitive abilities checked regularly, only 16% of them actually follow through with testing. I can understand why. Of the many things that fall away with old age, the loss of one’s cognitive capacity and memory just might be the most frightening. It’s a clear marker of infirmity that foretells the loss of independence. And, as noted in last week’s post, any condition identified as detrimental to mental health tends to be stigmatized.

My mother was among the smartest people I’ve ever known, and she viewed her intelligence as one of her primary assets. So, I imagine that it was really bothersome for her to experience a decline in her analytical capacity and  stellar memory. Early indications came 5+ years ago when she asked me to take over their finances when Dad went into skilled nursing. The cover story was that it would be easier for me to navigate all the administrative details that accompanied payment of fees and reimbursement by their long-term care insurance provider. But a quick glance at their books revealed that Mom’s accounting skills had really fallen by the wayside.

Mom was once our chief purveyor of family stories, providing extraordinary detail on names, relations, conversations, events, etc. In the last few years, she spent more time listening to the stories and acting as if she were following the conversation (but may not have been). A little over a year ago, she stopped being able to watch movies or TV shows – even familiar ones or those with really simple story lines. She just couldn’t follow the action and would say over and over, “What’s going on?” Within the past couple of weeks, she seems to have forgotten who I am.

As caregivers go, I am really, really lucky. My parents acquired long-term care insurance 25 years ago. As such, Mom can afford to live in one of the nicest Memory Care facilities in the area. Her room and the common areas are beautifully appointed. The organization attracts competent, caring staff. They do the “heavy lifting” (literally and figuratively) so that I can focus on being a daughter. Even so, it is still really difficult to watch my Mom struggle with everyday living. And there’s very little I can do these days other than sit with her.

As noted above, 1 in 3 older adults passes on with some form of dementia or Alzheimer’s disease. The sad reality is that the person you knew leaves long before his or her body finishes its earthly existence. I miss the mother who knew me. I miss the mother who shared my memories. I pray that she is as safe, comfortable, and peaceful as we can make her in these final days.