I’ve always wanted to take a turn as a cast member of a Broadway Musical. To my good fortune, I’ve been selected to play a bit part in the Sherwood Foundation for the Arts summer musical, Annie. In addition to participating in ensemble numbers, I’ll play Frances Perkins, Franklin Delano Roosevelt’s (FDR) Secretary of Labor and the first woman to serve in a U.S. President’s cabinet. I thought it only fitting to learn a bit about her.

Frances was born in Boston MA on April 10, 1880. She grew up a shopkeeper’s daughter in middle-class Worcester MA. With her parents’ encouragement, she was among the 3% of women who earned a four-year college degree. Her exposure to liberal-minded activists at Mount Holyoke College set the course for her life’s work.

She taught school for 2 years in Worcester before heading to Chicago to pursue social work. She had a particular interest in poor immigrant women and took a job rooting out the perpetrators of sex slavery who preyed on desperate women. She took note of systematic bias against women in labor markets – e.g., lower pay for the same work and denial of union access. She bolstered her credentials to address these issues through graduate studies at The Wharton School of Finance and Commence. Thereafter, she pursued a fellowship at Columbia University and was granted a Master’s degree in political science.

Fresh out of graduate school, Frances was hired to run the New York office of the National Consumers League. Her charter focused on 4 priorities: working conditions, long work weeks and substandard wages for women, child labor, and fire hazards. She lobbied against sweat shops and worked for corrective legislation. She recognized humane manufacturers by dubbing their wares “White Label Items” and encouraged consumers to “wear their conscience.” She redoubled her commitment to safe working conditions after 146 women died in the Triangle Shirtwaist Factory on March 25, 1911. That horrific event also galvanized her supporters.

In the aftermath of the fire, Teddy Roosevelt asked Frances to lead a Committee on Safety to improve working conditions and institute fire safety standards. He’d been impressed by her vitality, intrinsic optimism, self-confidence, work ethic, and boundless energy. Her investigative work provided the impetus for legislative reform.

Frances married Paul Wilson on September 26, 1913. He was a wealthy, handsome, connected activist who trafficked in New York City politics. After a miscarriage and a stillborn son, Frances delivered a healthy baby girl on December 30, 1916 who they named Susanna. Ever the activist, she spearheaded the formation of the Maternity Center Association to provide free ob-gyn exams and newborn wellness care for poor women.

A changing of the guard in NYC politics left Paul out of work and out of favor. He became volatile and unemployable while gambling away all of their money. He was subsequently diagnosed with mental illness and would spend the rest of his life in and out of institutionalized care. This development placed Frances in the unenviable position of having to work to support her family and pay for Paul’s care. 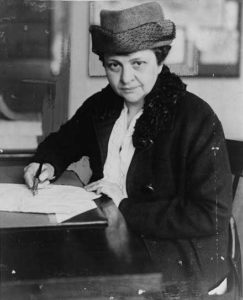 Under Governor Al Smith, Frances earned a post on the Industrial Commission where she established workplace safety rules and mediated labor-management disputes. FDR tapped her to serve in his cabinet when elected to serve as New York’s Governor. With the dawning of the Great Depression, she advocated for a State Employment Service, explored unemployment compensation, and became the nation’s foremost authority on labor statistics.

Upon his election to President of the United States, FDR asked Frances to serve as his Secretary of Labor. Though arguably the most qualified individual for the post, she faced extreme bias on many fronts from those who resented placement of a woman in high office. While these contrarians were a constant source of pressure throughout her tenure, she kept her focus squarely on the work and consistently took the high road.

With rampant unemployment at the start of FDR’s Presidency, Frances’ work was front-and-center on the President’s agenda. A short list of her accomplishments:

Frances’ personal life was never of a source of comfort during these difficult times. Paul could not manage on his own; he could not be trusted to circulate among the persons of influence with whom Frances worked. Susanna inherited her father’s mental illness and required an extra measure of support after her first marriage failed and a second one fell short of financial sufficiency. Frances’ financial obligations forced her to sustain full-time work after leaving FDR’s cabinet at age 65. She worked for President Truman as a Civil Service Commissioner and then took teaching positions at universities. She worked full-time into her 80s.

Frances Perkins did not achieve her due recognition in the annuls of history. Yet she would never have been one to toot her own horn. In reflecting on her life’s work, she would simply say: “I came to work for God, FDR, and the millions of forgotten, plain, common working men… ‘My cup runneth over and surely goodness and mercy will follow me.’”

Source: The Woman Behind the New Deal: The Life of Frances Perkins, FDR’s Secretary of Labor and His Moral Conscience, by Kirstin Downey