Spike and I crossed the finish line on the Fields of Greens cooking quest on July 2, 2016, 10 months and 2 days after we began. It was a great experience for both of us. Here are a few values that emerged on the journey.

The Value of Commitment. When making the decision to be “all in” with the quest, it pretty much eliminated the should-I-or-shouldn’t-I conversation about preparing the recipes. I just figured out a way to do it and discovered culinary territory that I simply would not have explored otherwise.

The Value of Encouragement. I hit one noteworthy low point when I nearly lowered my standards for completion. The sticking point was our lack of an ice cream maker and my resistance to buying one. So I thought I’d skip the affected recipes along with a handful of others while I was at it. Hats off to my friend Rebecca for cheering me on AND letting us borrow her ice cream maker. For the record: The Meyer Lemon Ice Cream and Mandarin Orange Sorbet were unreal! Not to be missed! 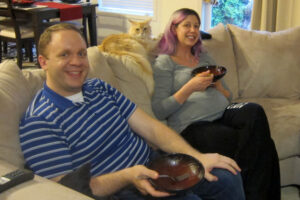 The Value of Sharing. We realized early on that the quest would go slowly if we had to eat all of the food that we prepared. So we started inviting people to dine with us given fair warning that they’d be noshing on food we’d never made. Suffice it to say, the fellowship was even better than the food… and the food was really good!

The Value of “Oh Well.” We had a few mishaps in the kitchen, and we sampled a few recipes that didn’t send us over the moon. Oh well! No big deal! I have confidence in my ability to improve on my technique and the discernment to know when it’s not worth the effort.