I have been a pasta lover all of my life. Growing up, my “birthday meal” every year used to be Mom’s macaroni with cream sauce and a salty slice of ham. In fact, I don’t think I’ve ever met a pasta I didn’t like – e.g., lasagna, cannelloni, tortellini, pasta alfredo, pasta with sausage and peppers, and, of course, spaghetti and meatballs. Yet, as a processed food, pasta isn’t all that healthy. And red meat has fallen out of favor given that a substance it produces during digestion – trimethylamine N-oxide or TMAO – may elevate the risk of cardiovascular disease.

So, what’s a pasta-loving gal to do? Make a few substitutions to my old spaghetti recipe!

FIRST: I substituted spaghetti squash for pasta. When cooked, this mild-flavored vegetable looks rather like a serving of angel hair pasta. I enjoy eating it plain with just a light dousing of extra virgin olive oil and Mrs. Dash seasoning. It also makes a perfectly good base for pasta sauce and compares favorably with the Real McCoy. One cup of spaghetti squash has a mere 42 calories versus 220 in noodles. Spaghetti squash also delivers quite a few essential vitamins and minerals.

To roast spaghetti squash in the oven, start by pre-heating the oven to 375°. Then:

If you’re short on time, you can slice, core, and grease the spaghetti squash, and then microwave it for 5-15 minutes, depending on the size of the squash and the microwave’s power output. Or, a pressure cooker can steam a whole, 2-lb spaghetti squash in about 15 minutes. Whatever cooking method you use, make sure you do not overcook the squash! You want the strands to have a little stiffness when cooked.

SECOND: Plant-based ground beef alternatives have been around for decades. They typically involve some combination of beans, grains, vegetables (e.g., mushrooms, kale), nuts, seeds, and/or tofu. I’ve tried a bunch of these recipes with varying degrees of success. None came close to replacing the good-old-fashioned ground beef that sizzles on the outdoor grill or cooks up nicely in a tomato sauce… until now.

In 2011, Stanford emeritus professor Pat Brown founded a company called Impossible Foods with a mission “to save meat and earth.” A biochemist and pediatrician by training, Dr. Brown was alarmed at the collapse in global biodiversity as a function of our excessive use of animals for food. He recognized that folks wouldn’t readily give up what they love to eat. So, he decided to create a plant-based product that tasted, smelled, and acted meaty. 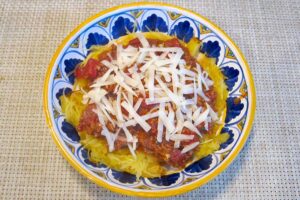 After years of research and development, the company’s signature product – the Impossible Burger – was launched in July 2016. Version 2.0 was released in January 2019. Impossible Burgers are available in select grocers and fast food restaurants. You can buy grill-ready patties or a block of ground meat substitute. From a nutritional standpoint, the Impossible Burger compares favorably with lean ground beef. A 4-ounce patty provides 240 calories, 19 grams of protein, 9 grams of carbohydrate, and 14 grams of fat. Having tried the patties and found them tasty, I used a ground block in my favorite tomato sauce to good effect. (I doubt anyone would know that I’d made the substitution!)

For those who are lactose intolerant, you can make a “vegan parmesan cheese” to top off your spaghetti by grinding a cup of cashews, a half-cup nutritional yeast, and some salt-free seasoning (e.g., Mrs. Dash Garlic and Onion) in a small food processor. I’ve used this concoction often and find it reasonably tasty. But I also allow myself the indulgence of freshly grated Parmesan cheese from time to time.